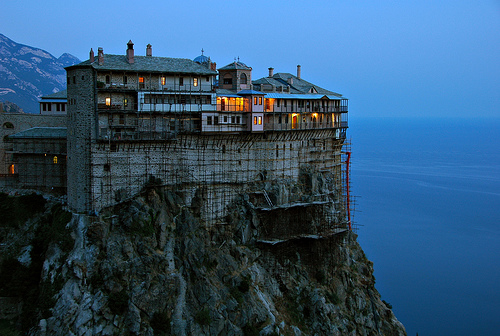 Mount Athos or as it is officially called the Holy Community of Mount Athos is an “Autonomous Monastic State” within Greece (perhaps unique in the world, with the exception of the secular Lhasa of Tibet), on the peninsula of Mount Athos in Halkidiki, Macedonia, which is considered the center of Orthodox monasticism.

It is one of the most important parts not only of the Balkans, but also of Europe and the Eastern Church due to its great national, historical, religious, literary and cultural value, as well as an important center for the preservation and conservation of rich material and rightly described as a “refuge” and “museum” of a unique treasure of Greek art and letters.

Mount Athos is also called “Orchard of the Virgin”, a name that comes from history: When the Virgin traveled with the Evangelist John to visit Lazarus, a storm forced their boat to moor in a safe harbor on the peninsula. There the Virgin was impressed by the rare beauty and asked her Son to give it to her.

Mount Athos, a sacred place shrouded in myth and history, religion and art for centuries, is now a UNESCO World Heritage Site.

The imposing Mount Athos encouraged people to associate him with myths because of his imposing volume, personifying him as a giant who once detached a rock from Thrace and threw it to Halkidiki created Mount Athos and other times when Poseidon, god of the sea flew a rock to Mount Athos, killing him.

A few miles SE of Mount Athos is the largest precipice in the Aegean that from a depth of 80m, abruptly reaches 1070m.

The first monks who settled on Mount Athos are recorded only at the beginning of the 9th century, who originally lived in caves, while the way of monastic life changed radically with the arrival of Saint Euthymius of Asia Minor.

In 883 the monks of Mount Athos, according to an imperial decision of King Basil I, secured their right to practice freely, maintaining it to this day, while in the middle of the 10th century the peninsula began to be called “Mount Athos”.
Saint Athanasios the Athonite marked the monastic state with his strong presence but also with the drastic changes he brought about and after securing large state funding, he built the “Vasiliki” in Karyes, in the place of the small temple of Protatos. “Vassiliki” was the beginning for further great buildings, such as the monastery of Megisti Lavra, the Monastery of Zygos, the monastery of Iveron, Vatopedi and others.

The immortality of Mount Athos occurred in the 12th century, when cattle breeders settled on the peninsula, disrupting the monastic life of the monks. Thus, royal intervention expelled stockbreeders and all the laity, as well as women, by instituting a ban on their entry, something that was only enshrined in the 20th century by the European Union. 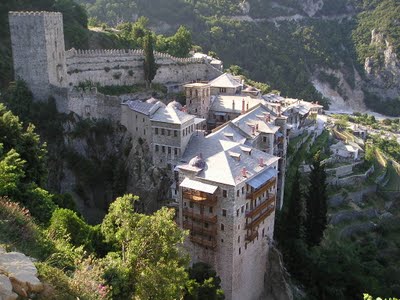 During the Ottoman Empire and more specifically in 1387, Mount Athos submitted to the Ottomans, for a short time, until it returned to the rule of the King of Thessaloniki. In 1423 he submits again, voluntarily this time, ensuring the milder treatment of the conquerors. The monks, taking advantage of this event, managed to strengthen the field of education and, among other things, to establish Athoniada, a school that managed to greatly influence the bad state of education of the then enslaved Hellenism. In 1821, Mount Athos nevertheless sided with Halkidiki and helped the Revolution, which later paid dearly, both financially and with victims, men, women and children, who had then found refuge on Mount Athos.

According to the considered first Standard ratified by the Emperor John Tsimiskis, Mount Athos is simply called “Mount” which may have been the usual name of the place at that time.

However, the predominance of the name “Mount Athos” seems to have taken place during the first half of the 12th century, specifically in a golden document of the Emperor Alexios I Komnenos to the Holy Monastery of Megisti Lavra in 1144 which is definitively and officially recognized and the new name is imposed as written σ΄ αυτό:

Mount Athos can only be reached by sea and has two boarding ports, Ierissos and Ouranoupolis.

Most pilgrims are served by the port of Ouranoupolis because it is more protected from adverse weather conditions than the port of Ierissos.

To reach Mount Athos you will need to call the Pilgrims’ Office in Thessaloniki (2310.252.575) to be issued the relevant residence, ie the official document issued by the Holy See and provides you with three nights.
You should take care of its establishment in time, especially during the summer months, because every year a large number of pilgrims arrive from all over the world and the number of visitors daily is limited to 120 people.
The required information is: Name, father’s name, year of birth and police ID number with the issuing Authority.

Once the process of the Accommodation is completed, you should contact the monasteries you are interested in visiting.

You will pick up the Accommodation from the Pilgrim Office in Ouranoupolis, on the day of your departure from 8:00 to 9:30 in the morning, always with your police ID. Then get the ferry tickets. The boarding is from 9.30 am to 9.45 am, departure time for Daphne. The route is extremely enchanting and mysterious so be sure to take a camera with you.

Mount Athos is an autonomous and autonomous part of the Greek state, which is politically under the Ministry of Foreign Affairs and religiously under the Jurisdiction of the Ecumenical Patriarchate of Constantinople. Geographically it is divided into twenty autonomous regions. Each area consists of a dominant monastery and various other monastic settlements around it (hermitages, cells, huts, seats, sanctuaries). 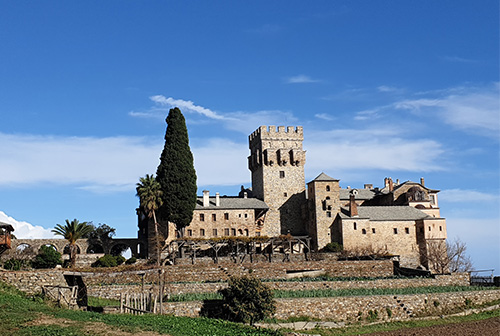 It is governed by the Charter of 1924. The Greek State is represented by the Political Commander of Mount Athos who is responsible for the observance of the Mount Athos regime and reports to the Ministry of Foreign Affairs and from the ecclesiological point of view to the Ecumenical Patriarchate of Constantinople.

The Skete (Skites) is a monastic institution that belongs to a Sovereign Monastery or Monastery. The Sketes are small monasteries that are also distinguished like the Athonite Holy Monasteries in convents and idiosyncrasies.

These are organized communities consisting of many monastic huts. In the middle of each Skete is the so-called “Kyriako” which is the common temple for all the huts built around it. The head of the Skete is the so-called “Righteous” who is elected every year usually on May 8 by the “elders” of the Skete with the help of 2 or 4 counselors, half of whom come from the Skete itself and the other half from the Sovereign. Monastery to which the Skete belongs. The monks settled in them are called hermits and are engaged in agricultural and livestock work as well as hagiography, wood carving, music, etc. 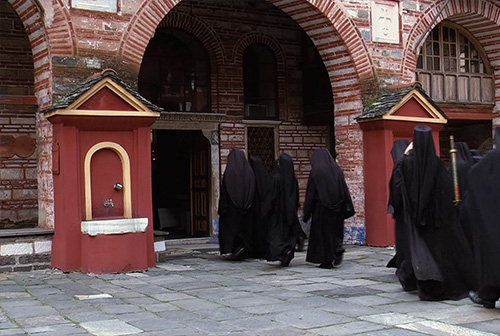 In Greece, the most important hermitages are the Athonites.

There are twelve Hermitages on Mount Athos throughout the Athonite peninsula. Of these convents are four:

The other eight are all Greek, idiosyncratic or archetypal hermitages, which are:

The monastic cell, like the hermitage, is a monastic institution that belongs to a dominant Monastery or Monastery.

The monastic cells are relatively spacious buildings that look like rural houses that have a built-in nave or a temple and to which a territorial area of ​​the dominant monastery has been granted depending on their size and history. These are usually granted to very small groups of 2-3 monks who are engaged in parallel with their religious duties in agricultural, livestock, construction and other works.

However, apart from the above, there are also cells in holy pilgrimages that are specially granted to meet the needs of the pilgrims. These are a series of single-storey or two-storey buildings around the sanctuaries, or only on the side, such as. in the Monastery of Panagia of Tinos, of Argokiliotissa in Naxos etc.

Most monastic cells in Greece are located on Mount Athos, Meteora and Monemvasia.

The monastic hut, such as the hermitages and the cells are monastic institutions that belong to a dominant Monastery or Monastery

The monastic huts are also buildings smaller in size than the cells that also have a built-in aqueduct, but which has not been granted land by the dominant Monastery, in contrast to the cells.

The monks in these monastic institutions live in small groups, as in the cells, dealing mainly with various arts and crafts. It is possible for many huts together to give the impression of a small settlement but they do not maintain any organization or relationship between them.

Most monastic huts in Greece are located on Mount Athos and specifically at the southwestern tip of the Athonite peninsula, in the areas: Little Agia Anna, Katounakia and Agios Vassilios.

The monastic seats are also monastic institutions such as the huts, which belong to a dominant Monastery or Monastery.

These are small buildings, much like the huts, which are usually located very close to and around the Monastery to which they belong. These are small and are used mainly for the residence of the monks “alone”, more of a temporary nature. The monks of these institutions secure their food from the dominant Monastery by paying a small amount of money.

Monastic seats are found in almost all major Monasteries (Monasteries), with the most famous being those of Mount Athos.

It is a place that is generally characterized as a monastic institution and belongs to the dominant Monastery or Monastery. In addition to the name Hermitage, the words hermitage or hermitage are also used. The sanctuaries are usually simple and look more like huts or arranged caves inhabited by monks who want a more rigorous practice (to practice), completely unhindered and away from any worldly challenge. The monks who live in them are called ascetics. They are fed about once a week by the dominant Monastery.

The sanctuaries are usually located in remote and deserted areas, mainly in steep places characterized as “eagle nests”. Access to these areas is very difficult and is difficult with narrow paths and steep slopes.

Over time, many original sanctuaries evolved into Monasteries such as those of Meteora.

At Mount Athos there are most sanctuaries and are characterized as settlements, such as the famous settlement of Karoulia, located on the road after the Skete of Agia Anna to the Monastery of Megisti Lavra, on a steep area.

Hermitages are found almost all over Greece, near the monasteries.

Justice is administered by the monastic authorities and the Holy Community, except in criminal cases.

The Holy Monasteries are self-governing and are governed according to their internal regulations, which are voted by themselves and approved by the Holy Community. The Holy Community consists of twenty representatives of the Monasteries and is based in Karyes as a permanent body.

According to the old Byzantine order, women are not allowed to enter the Athos peninsula. This restriction has a spiritual basis in the virginity of the monks and the dedication of Mount Athos to the Virgin Mary. It is called “avaton” and has been in force since the beginning of the establishment of the idiosyncratic state, although in the past at times of need it has been catalyzed.